Gemma Genazzano has been called a “Latin Soul Goddess” … and for very good reason. Living between Barcelona and New York, she has been captivating audiences with her irresistible voice, Spanish lyrics, exotic melodies, and sensual soul rhythms. She has performed at jazz music festivals in Europe to New York’s Blue Note and Madison Square Garden. And, now, with her highly anticipated worldwide release of “Si Me Quieres/If You Love Me, Gemma has managed to create an entirely new crossover genre of music … Jazzy Latin Soul. When soulful grooves and smooth, sexy Spanish and English lyrics combine it has an irresistible effect on the ear. Gemma welcomes listeners to a musical journey filled with love, sensuality, and romance. As her seductive vocals float with ease her red hot New York City band sizzles, one cannot help but feel that Gemma Genazzano is very comfortable exploring her passions.

Read MoreHide
She is the daughter of late Italian actor, Oswaldo Genazzano and the granddaughter of Italian actress Gemma Genazzano who worked with the legendary Federico Fellini – so, performing runs deep in her blood. At an early age, Gemma was drawn to jazz and gospel music earned a scholarship to the prestigious Berklee College of Music in Boston, Massachusetts where she won numerous music composition awards and first met Marlon Saunders. Marlon Saunders work has been rooted in the soul scene since his days with jazz/soul group Jazzhole. Saunders, on the scene touring and recording as a vocalist with such artists as Sting, Bobby McFerrin, Shania Twain…

After moving to New York City, she reconnected with Saunders and New York musicians with deep roots on the Soul music such as pianist Joe Scott who Tour with peter Gabriel, Lauren Hill… they have collaborated to create a unique sound for this fiery Latina artist. Acting as executive producer, Saunders spent more than nine months co-writing and creating tracks that would later become “Si Me Quieres/If You Love Me.”

Soaring background vocals intoxicate and horns accentuate while making you feel as though you’ve been transported to a special world where everyone just seems sexier.
So, relax with a glass of wine, light a candle, get cozy with that special someone and let Gemma Genazzano sweep you away into a world where romance is always in the song…
Presently working in her next album. 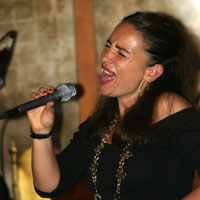