Ann plays guitar and mandolin and other things with strings. As a composer/songwriter, she has: toured in Europe consistently for many years,(with plans currently being made for more touring in spring 2014), plays house concerts in the tri-state area, Texas, CA; received lots of nice press from publications such as Billboard and HARP; written music for: three documentaries for French television; THE ENERGY FACTORY; and Metro Music, Inc. As an instrumentalist, credits include: Kate Pierson of the B-52s, Joan Osborne, Ani DiFranco, Darden Smith, PM Dawn, Will Lee, Natalie Imbruglia and the American Composers Orchestra. She has lent her expert guitar skills on Broadway in “Grease”, “9 to 5”, “Baby It’s You”, “Everyday Rapture” and “Kinky Boots”. Ann has also produced recordings for several artists with her partner, Tim Hatfield and was a MacDowell Colony grant recipient. In fall of 2005, she was a guest teacher at the Danish Rythmic Music Conservancy with 15 other teachers from NY and LA and serves on the faculty at the 92nd Street Y School of Music. She is most proud of her ability to wah wah her way out of any solo, anytime.

“Somebody call the Bonnaroo bookers: This gal’s as steamy as a hot July afternoon.” Fred Mills, HARP

Read MoreHide
Ann Klein has established herself as one of downtown NYC’s most diverse musicians/composers. Her credits include: Natalie Imbruglia, Joan Osborne, PM Dawn, Toshi Reagon, Kate Pierson of the B-52s, Ani DiFranco, Will Lee (Letterman Show) and she has played on Broadway in the shows Grease, 9 to 5, Everyday Rapture, Baby It’s You and currently Kinky Boots.

Ann moved to NYC from Connecticut and soon landed a gig with Joan Osborne doing intense touring and radio shows. They did a cable TV show together, which was constantly broadcast on VH-1’s “Before They Were Stars”.

Ann had written countless songs and soon independently recorded “Driving You Insane” which was critically acclaimed in Billboard, Relix and other publications. She was featured on the cover of Billboard in an article on NYC’s best unsigned bands. Ann took “Insane” on the road, traveling the Northeast and Europe. She received support from hundreds of college radio stations, local press and performed on WXPN’s “World CafŽ”, and WDST’s “Sessions”. Billboard got hold of Ann’s second release, “For the Love of Love” and again featured her in July, 1999. She returned to Europe to tour and continued to receive radio and press support. In January of 2002, Ann went to Europe and made “Waiting for the Snow” and toured again in support of the disc. In 2005 she completed “My Own Backyard” and in 2006 released “The Hope Street Sessions/Live at the Lakeside Lounge” with her European rhythm section which was featured on NPR. All her CDs have sold well on tour and she has been invited to return to Europe consistently for many years, primarily in Austria, Italy, France, Switzerland and Germany. Plans are under way for a spring 2014 tour. While there, she has also done guitar and songwriting workshops. She was invited to be a guest teacher at the Danish Rhythmic Music Conservatory.

Ann has played most of the clubs in NYC (The Living Room, Googie’s Lounge, Arlene Grocery, Makor, Cornelia Street CafŽ, Joe’s Pub, the Lakeside Lounge, Rockwood Music Hall, etc.) as the main performer or as a guitarist for other folks. She even made it to Carnegie Hall, playing with a 17 piece ensemble for the American Composers Orchestra. 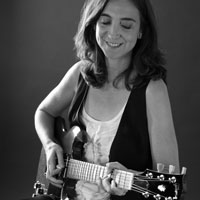 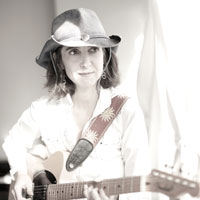