A story at the crossroad of US and Caribbean Islands
“Put the lime in the coconut”… We all know the lyrics of the song interpreted by Jimmy Buffet, sound-tracked in Quentin Tarantino’s movie and still on air on all good stations.
This song could have been written in Lefranc’s restaurant… after a couple of rum cocktails. And the BAZ Bar story started precisely when Jean-Marc randomly met Jimmy Buffet in a crazy pier-party that could only had happened on the Caribbean islands.

It’s the late 90’s, Jean-Marc has just opened BAZ Bar when Buffet decided to extend his music show, offering a two hour extra gig … in the restaurant! No one will forget the performance that still belongs to Saint-Barth’s legendary moments. The restaurant logically became a showcase. One’s getting along with the other easily. All the best musicians from the house of blues to the rarest folk came on the island one after the other to play in front of a public larger and larger every year.

The restaurant became a refuge, a residence for all of these artists. Saint-Barth’s people and foreigners enjoyed discovering new music styles and were happy to extend their horizons. “It’s as if a part of America was invited on the island” said Marius Stakelborough, iconic owner of the Select Bar and Jean-Marc’s best friend.

BAZ Presents, created in 2012, aims to continue its music long story. Show must go on. The platform is presenting a catalog of musicians who has been selected by Jean-Marc and his friend, the guitar player John Caban.

BAZ Presents, along with his musicians is presenting a platform that celebrates music and above it, rare, authentic, precious and ultimately exalting live experiences.

BAZ Presents is the epitome of the live performance’s music style and a full-service offer from music programming to events productions.

After classic hotel management studies, and most demanded positions in the high-end French Brasseries of Paris, Jean-Marc Lefranc did not choose the easy road. He chose freedom.
Born in Marseille, France in 1968, a sea-lover, he experienced his first and yet decisive adventure while he was working on board of the  Windspirit Cruises restaurant.
The twenty year old preppy-boy discovered the Caribbean Island: “I remember the amazing beauty of Saint Barth. I stared from my window as we were approaching the coast, early-morning. It was love at first sight”. And he settled down there until now. 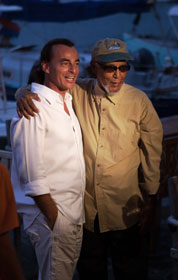 Gustavia, the main town, welcomed him warmly. Marius Stakelborough, the owner of the legendary Select,  offered him the management of the Bar right away. The Brasserie  savoir-faire combined with the French touch of the young bartender seduced everybody around. The Select was more than ever the most-demanded place where everybody rushed to come and party. And Lefranc to add “I remembered once I was dancing with Noureev, barefoot with short pants on all night long … we were drunk … it was completely crazy”.
He started to improve his island-man skills and initiated a new fishing business for almost four years.

It seems all the ingredients where there: passion for hosting, love of sea-food products, French cuisine savoir-faire, amazing sense to create the most exciting party’s atmosphere ….

Lefranc and his wife, Fanny opened the Bete a z’ailes in early ’99.
A gig of Jimmy Buffet put the first spark on the place and launched a new concept: from now on, the restaurant would also be a live music showcase.
Bete a z’ailes, local nickname given to foreigners, aka BAZ became the bar and the restaurant where people from all over met. An institution. A legendary meeting point where the US music scene was invited to play for a couple of weeks on a little peaceful corner in the Caribean sea.
Almost two decades of history with famous musicians, memories, passions for music shared with the locals and the passengers that Jean-Marc would tell again and again with his largest smile.

BAZ Presents, his music catalog and platform of production services recently launched, is the quintessence of fifteen years of BAZ Bar’s music programming.
Created by Lefranc and his friend John Caban, BAZ Presents is engaged to promote music creations and to transmit authentic genres such as Folk and Blues away from the industry and the music globalization.
The catalog proposed by Jean-Marc counts more than twenty bands who are all sharing his vision, desire of new live and gig experiences and above all, joy to offer magic moments.

Find out more about the legendary live music restaurant on the island of St Barth.